Pendant in the form of a female figure

End of the Magdalenian
Around 15,000 years

At the end of the Magdalenian, coincident with a period of climatic warming, large numbers of schematic female figurines appear.

The female body is systematically depicted in profile, without head or individualized limbs.

This new approach to the female figure reflects cultural traditions that emerged in an area undergoing climatic and landscape changes.

The schematic jet statuettes of Petersfels mark the disappearance from Western Europe of the long figurative tradition of hunter-gatherer artists. They are the first signs of a profound revolution in symbols and life-ways. 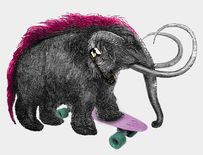